Been there, done that: and this is what I have learned

Davide Iannuzzi has seen many (want-to-be-)entrepreneurs struggling in the first phases of the idea-to-market process. He recognizes those struggles because they are the same struggles he had when he started Optics11: how can I go from idea to product? Which problem is my technology solving? How can I get rid of my ego, win my fear of failure, and secure the resources I need without losing ownership? In this talk, Iannuzzi will look back at these issues and provide some food for thought to help (want-to-be-)entrepreneurs overcome their struggles and unleash the potential of their ideas.

Davide Iannuzzi (PhD, MBA) holds a full professorship in physics at the VU University Amsterdam, where he serves as director of valorization of the faculty of Science and director of the Demonstrator Lab – a laboratory where students and staff can transform their ideas into customer added value. He is one of the two co-founders of Optics11, which now counts some 55 employees, and has coached dozens of teams in the early phase of idea-to-market. He is author of the book “Entrepreneurship for Physicists”, which has been already downloaded more than 20,000 times. 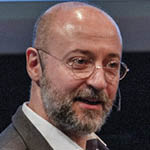